I have never tried to make wontons before. I watched a cooking video on the subject by the Tamra Davis Cooking Show and decided to try my hand. I knew it would be a time consuming task so I decided to do it over a weekend using two days to complete the task. On Saturday night I grilled the chicken and sauted veggies. I let the veggies and chicken cool overnight in the fridge and made won tons on Sunday morning. You can freeze uncooked won-ton (or ravioli) so I decided it would a good thing to try as it could turn into a quick dinner on a night with little time for prep. Just pop them in boiling broth and poof- done.

A few notes:
1) we do not own a Wok, so I used a seasoned cast iron skillet pan for its even heat distribution.
2) I substituted a lot in this recipes due to Miles’ soy allergy and our CSA’s share. I did NOT buy anything special for this recipe, everything is from my pantry or frig.
3) I have notes by changes below in parenthesis. I have not changed the cooking instruction part of the recipe- I followed it to a T.

1 package won ton skins
(in any grocery store in the produce section- where the tofu is located.

* Note: I did not want to make my own so I doctored up the ONLY store-bought broth I had in my pantry. A Rachel Ray Beef Broth-bought for cheap at Ocean State Job Lot. I boiled the broth for 30 minutes with an additional 3 carrots, a big hunk of ginger, 2 scallions and a teaspoon of red pepper flakes)

Won Tons- Heat oil in a wok* or a large skillet. Chop onions finely in a cuisinart. (Everything is cut in a cuisinart finely-if you don’t have one, you can use a knife, and have everything cut before cooking) and add to hot oil. It should sizzle. Stir and lower heat slightly. Add minced garlic. Stir. Chop carrots and add them. Chop celery and add that to the wok. Stir. Do not let vegetable turn brown. Keep stirring. Add chopped cabbage, mushrooms and tofu. Stir. Add soy sauce. Taste. Add a bit of chili sauce if you like it spicy. Heat until the mixture has no residual moisture. Add cilantro and then place in a large bowl to cool.

Make broth- in a large saucepan heat 6-8 cups of water. Add all your vegetables and bring to a boil. Reduce to a simmer and add a tablespoon or so of soy sauce. Let this simmer for at least 30 minutes. Strain and then return back to pan. Season with more soy sauce and salt to taste.

Wrap won tons – First put a cookie sheet covered in wax paper or foil next to you. Also put out a small bowl of water.
Put a dab of water on two touching sides of the wrapper. Place a teaspoon of filing in the middle. Press together in the shape of a triangle. Sealing the edges. Place a dab of water in the corner and bring the other corner over and press together. Place on the sheet and keep going till all are done. (Place leftovers on sheet in freezer. After 4 hours transfer to freezer container) 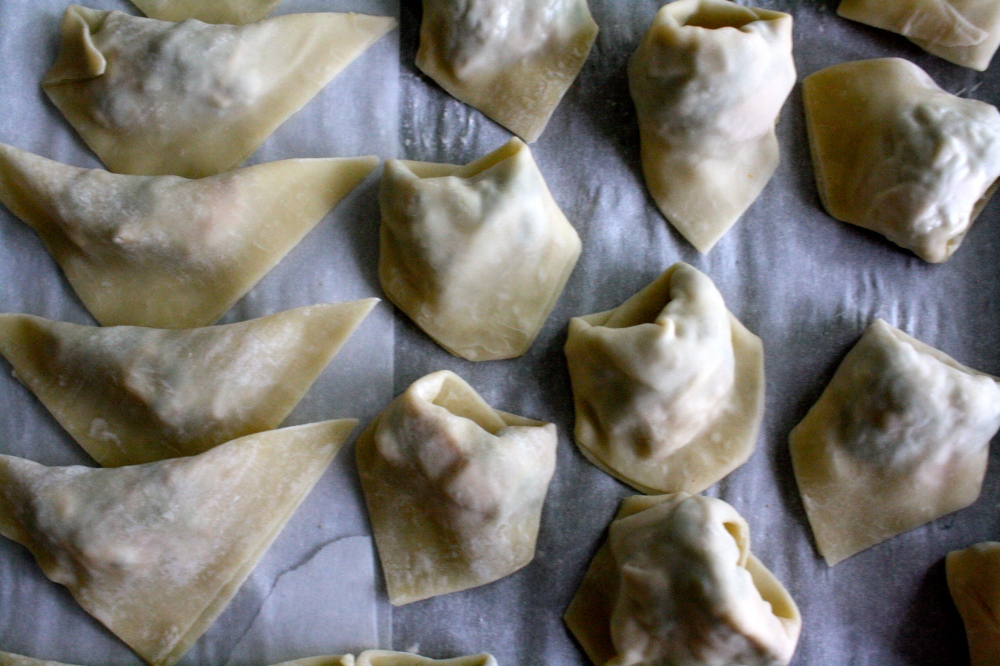 Bring broth to a slow boil and add won tons one by one. Make only about 12 at a time. They are done in about 3-5 minutes. Make sure there are no holes in the won tons. Place in a bowl with the broth and top with a few cilantro leaves.